To drink in Big Sky Country is to drink in a vast, expansive and beautiful landscape with a mind and heart all it’s own. This NW Cider Club release is packed full of special gems from Montana and Idaho, a region of magnificent glacier-capped mountains, deep azure lakes, snaking rivers, rolling prairies and fertile, apple tree dotted valleys that a hearty handful of cider crafting adventurers call home.

Discover Big Sky ciders with this box of 6 hand picked ciders from Montana and Idaho. 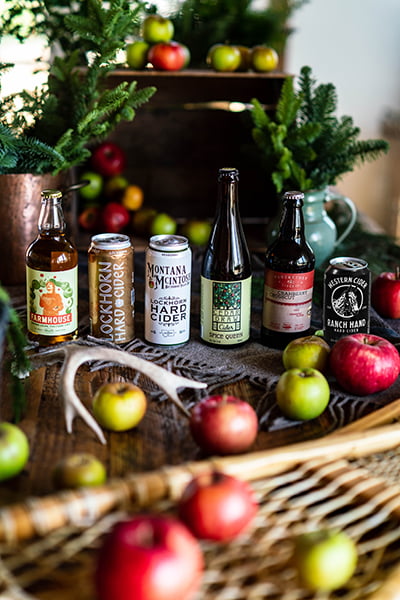 Our Big Sky NW Cider Club Release is the last of the year, marking our one year anniversary since launching the cider club. We love exploring together and learning what ciders most delight our club members. We have carefully curated a little something for everyone in the Big Sky line up– dry and complex, semi-sweet, spiced, fruit, barrel aged, bubbly and solid, single varietal standbys. This release has it all!

Landing on doorsteps in mid-December (when you order by 11/17) this club release is stocked full of flavors that are interesting, but not overpowering, ready to greet your fancy stemware yet totally unpretentious – worth ordering for yourself or gifting.

The Discover Big Sky release includes the 6 ciders listed below. This release is $49 plus shipping and handling. Email club@nwcider.com for a shipping estimate.

The Discover 12 Big Sky release includes 2 of each of the Discover ciders (12 total) and is $98 plus shipping and handling.

The Discover & Elevated Big Sky release includes 4 Elevated and 6 Discover ciders and is $130 plus shipping and handling.

Western Cider’s Farmhouse embodies the bold big sky spirit and invites you to embark on this next leg of your cider journey. A true farmhouse, the Western team says this cider is, “made more by the orchard than us.” This new, limited release is crafted with several apple varieties from Western’s Billingsley Cider Orchard in Bitterroot Valley [Elevation: 3,650 ft. / Rootstock: Bud 9 – G935 – M7 / Planting: 2012]. In this blend, Hewe’s Virginia Crab, Frequin Rouge, Kingston Black, McIntosh, Muscadet de dieppe, Bulmers Norman, Domaines, Chisel Jersey, Major, Noel des Champs, Nehou, Cox’s Orange Pippin, Harry Masters Jersey and Brown apples harmoniously come together. Each cultivar in the orchard yields varying amounts of fruit, depending on the harvest. Some produce a bumper crop one year and nothing the next. Western Farmhouse matured in neutral oak barrels for 6 months. Nearly still, this cider offers austere notes of bittersweet apple with a restrained funk. Soft hay and ripe mango come through in the apple bouquet while the cider moves across the tongue with nicely rounded apple skin and warm peach fuzz chased by vibrant lime zest.

Located on the banks of the Clark Fork River in Missoula, Montana. The Western Cider dream was seeded in 2012 when co-founder Michael Billingsley planted 2,500 cider apple trees in Montana’s Bitterroot Valley – just south of Missoula. Now, with nearly 5,000 trees and over 50 varieties of apples Western uses those apples, as well as apples from Northwest orchards, to produce easy going and traditional ciders.

Billingsley Cider Orchard was established in Stevensville, Montana in 2010 by Western Cider’s co-founder Michael Billingsley and his wife Arielle. They found a bench with bare land above the valley floor. Historically, this bench was heavily planted with apple trees in the Bitterroot apple boom days. Irrigation for the orchard is gravity fed from The Big Ditch, which was originally constructed at the turn of the century to irrigate the original Bitterroot apple orchards. This orchard takes inspiration and planting styles from modern American dessert apple orchards, French cidre orchards, Spanish Sidra orchards, English cider orchards, and Michael’s own self proclaimed hair brain ideas.

Lockhorn welcomes cider drinkers to their downtown Bozeman tasting room, a classy, comfortable remodel of a historic farm house garage. The cozy outdoor patio and fireplace surrounded by native wildflowers, grasses and trees is an idyllic setting to drink in the landscape. Their ready-to-adventure cans are up for a snowshoeing, tree trimming, an afternoon with friends, family and good food or whatever your experience of the season brings.

Our second featured selection from Lockhorn is a beloved favorite among locals and fast becoming celebrated among cider aficionados lucky enough to enjoy. A new offering in 2019, Montana McIntosh Bitterroot Valley Brut is named for the valley outside of Missoula, where these McIntosh apples are grown. The brut part of the name speaks to Lockhorn’s signature clean, dry style.

From handpicking in the orchard all the way to the can you enjoy, this award winning limited release, small batch cider is crafted with patience and love. Tart, dry and delicious with delicate white peach, pear and fresh juice notes, this cider is a liquid embodiment of McIntosh apples, a fruit that grows best in cool areas where nights are cold and autumn days are clear. McIntosh apples, which can be enjoyed fresh, cooked or pressed into cider are an apple we love digging into when we want to taste Montana terroir. Producing small to medium sized round fruit with a short stem, McIntosh apples are well adapted for cold hardiness, a match for Montana winters.

Pro tip: get apple geeky and enjoy trying all three McIntosh ciders in this Big Sky Cider Club Release when you are part of the Elevated + Discover Club!

This cider struck us as the perfect spiced cider for the season. Sure, we love a good apple pie, but we were searching for something a little different and found it in Cedar Draw’s Spice Queen. Fresh pressed apples meet cardamom in this delightful, unique small batch seasonal cider. Traditionally used in Indian and Nordic cuisine, cardamom has been rightly called “the queen of spice” for it’s regal, complex flavor – citrusy, woodsy and highly fragrant all at the same time this cider is the drink you didn’t know you were looking for. Revel in it’s captivating aroma and strong finish, noting that the bright apple base remains present and balanced throughout. This is one of those hard to find cider gems worth exploring.

Established in 2018, Cedar Draw is an Idaho Nanocidery with a holistic “Tree to Table” approach, using fresh ingredients from beautiful Southern Idaho as often as possible, including fruit from their own farm. Looking for a creative outlet beyond her work, Emily Mason, a nurse at St. Luke’s in Twin Falls decided to try her hand at cidermaking. Living in a farmhouse once surrounded by a 200-acre plum orchard (a few acres of which still survive) she began fermenting mostly with table apples from old-growth orchards. Finding a passion in cider, Emily and her husband John planted a stand of dedicated cider apples. Emily likes to ferment bone dry and takes great care in the small batch production of old world style ciders. Cedar Draw hosts limited hours at the small tasting room on the farm. Their ciders can sometimes be found on tap at another Cider Club featured maker, Meriwether Cider House.

Cranberry Crosscut from Meriwether Cider is our fruit selection for the Big Sky Club release. We couldn’t pass on cranberries this season and the tart bite of cranberry combined with a refreshing sweetness carries big flavors all the way through the cider. A brilliant ruby hue in the glass and the bright, citrusy and smell of cranberry leaves no question that this cider is going to deliver something special. Apples and cranberries, plain and simple, deliver plenty of acidity, with a taste like fresh-made homemade cranberry sauce. Keeping to the beauty of fruit, there is no lingering sugary coating on the tongue, just a refreshingly clean finish. This award winning cider is perfect for a meal pairing or cider cocktail blending!

Meriwether Cider got its start in 2016 when the Leadbetters family – Gig, Ann, Kate and Molly found themselves at a life crossroads at the same time. This quartet of outdoor loving, adventurers (and fire fighters!) embarked on a dream many parents may have of working alongside their adult children to build something creative and fun. Named after explorer Meriwether Lewis of the famous Lewis and Clark Expedition, to whom the Leadbetter Family is distantly related. Lewis, being the first explorer to cross the continental divide into Idaho, the name pays homage to both a connection to place and family. Over the last five years, Boiseans have enjoyed imbibing their wide array of unique ciders and celebrating together in their (now two) Idaho locations in Garden City and Boise.

Iconic and enjoyable, the final cider of our Big Sky Cider Club release is Western’s Ranch Hand. Their flagship, what Western describes as an “easy going” cider, this black can with a friendly horse makes us smile ear to ear. Crafted with two yeasts, mimicking wild fermentation, Ranch Hand is full-bodied, but not too heavy with notes of cherry-almond, pastry dough and golden raisin. Made from fresh-pressed Northwest apples, this reliable, sturdy cider works anywhere. Trust us, you’ll drink it and wish you had another (Discover Club 12 anyone?).

In the land of many mountains, on the banks of the Clark Fork River in Missoula, Montana, Western Cider opened their tasting room doors in April 2017. The building, which is now their production facility and tasting room, was previously a tannery and tire shop. The tasting room is expansive – with a long oak bar, plenty of seating, and a beautiful riverside cider garden. A perfectly perched patio views the surrounding mountain ranges and is home to 50 cider apple trees which demonstrate some of what Western grows in their Bitterroot Valley orchard. In addition to a heap of events and happenings and seasonally curated cheese plates year round, Western offers tasting boards of our cider menu – which is a rotating cast of 12 unique ciders, all made in-house. 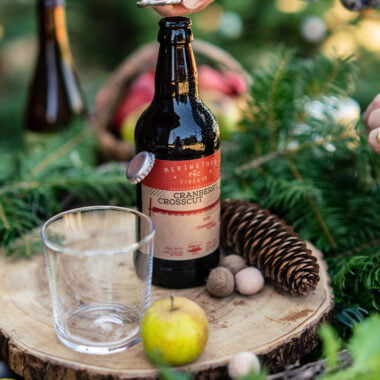 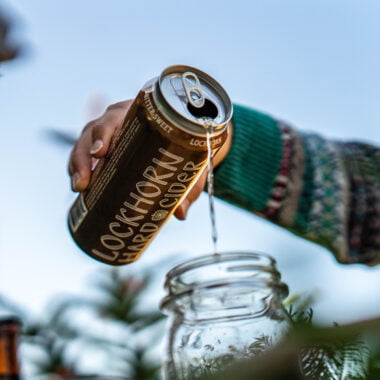 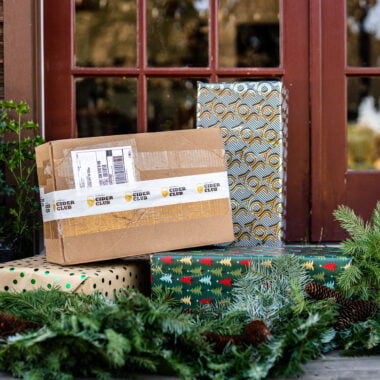 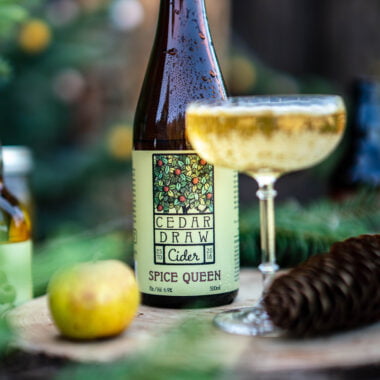 A next level cider experience featuring four celebration worthy large size bottles delivered to you quarterly. Each Elevated Cider release will be $70-$90 plus tax, shipping, and handling.

Hard to find, expertly curated NW ciders delivered to you 4 times per year. Each Discover Cider release contains six ciders and will be $50-$60 plus tax, shipping, and handling.

Double the fun of the Discover Cider Club! Get two of every cider to save on shipping and share with a friend. Each quarterly Discover Cider 12 Bottle release contains twelve ciders and will be $100 - $120 plus tax, shipping, and handling.

Join both clubs at once and get all the cider in one box! Experience the Discover Cider Club (6 bottles) and the Elevated club (4 large bottles) each quarter. $120-$150 plus tax, shipping, and handling.

Not ready to join the club?

Are you of legal drinking age?